Succession planning for family offices is often a difficult process. It is emotional. It takes longer than it should. But succession planning that is deliberate, collaborative, and strategic can offer so much opportunity.

Katten recently hosted a conversation with Jane Flanagan, Director of Family Office Consulting at Northern Trust, who discussed a survey conducted with former family office CEOs to capture their experience with succession and succession planning. The results were illuminating, and the survey participants spoke loud and clear about two major points: 1.) they wished they had begun the process sooner, and 2.) they wished they’d known what questions to ask along the way.

We've pulled together a series of basic questions about succession planning to help you consider your own approach.

Why should I create a succession plan?

Like it or not, a succession will take place eventually. The last thing you or your family office want is the chaos, acrimony, and setbacks an unexpected succession can cause.

Putting a plan in place can give your current leadership peace of mind, ensure buy-in and collaboration throughout the family, and prepare potential internal successors or identify key attributes for external candidates.

When should I start?

Now! It’s never too early to begin planning, and there are some easy steps you can take right away to set you on the right path.

If you aren't sure where to begin or what a planning process looks like, you're in good company. According to Northern Trust's recent survey, 64 percent of family office CEOs expect a succession event in the next three to five years.

What is included in a succession planning process?

The planning process will differ from family to family, but Northern Trust created a checklist to help you think through your own approach.

Taking on the entire process at once can be daunting. To build momentum (and buy-in), consider starting small by documenting the responsibilities of the current leadership.

Once you have a good sense of the current role's responsibilities, think about the knowledge and relationships critical to the role's success.

These should be top considerations throughout the succession planning process.

Where should I begin?

You want to give this process the time, attention, and consideration it deserves. An emergency plan will help immensely if an unexpected succession is needed, so focus first on getting that in place before you set out on a long-term planning process.

How do I find the right successor?

This is why the planning process is so important. These decisions can have a big impact, so you want to have a plan in place well before you need it.

Consider what works and what could be improved about the current role. Are there creative approaches or changes to consider? (Such as shifting to a CIO/CEO hybrid role, refocusing the role’s priorities, or even expanding into a multi-family office.)

Northern Trust's survey participants were evenly split on their choices to hire an external successor or grow a successor from within. There are pros and cons to each approach, but so many of the factors to consider will be specific to your situation.

Outside counsel can help you with this and ensure your succession planning is conducted with transparency, diplomacy, and strategically. 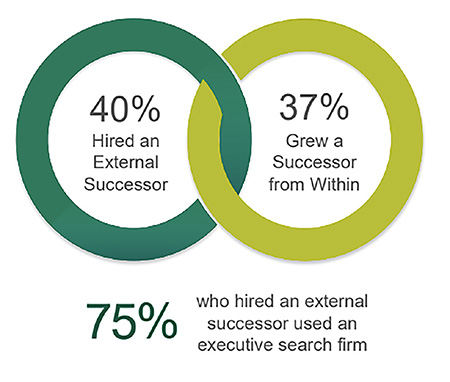